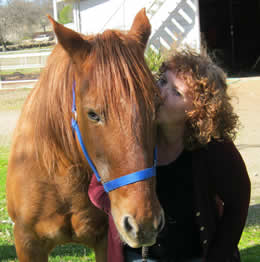 As a child I didn’t consciously communicate with animals, although I always loved them. I  wasn’t aware of being intuitive or psychic, but I had a keen ability to tune in to how people and animals felt. I learned to communicate intuitively with animals by taking classes, starting in 1989, and by practicing with all sorts of animals in all kinds of situations, using verifiable exercises.

My background is academic and scientific. I have a BS in Resource Conservation from the University of California at Berkeley, and a MS in Biology and Systematic Ecology from San Francisco State University. I spent many years studying wildlife in the field, rehabilitating ill and injured animals, and working as an environmental scientist. An academic background made learning animal communication difficult. I hoped it was real, but it was hard to accept it and even harder to believe that I could do it. The process I had to go through to trust my ability helped me become a good teacher and be supportive of others who are just learning.

I found out about animal communication during a vision quest in the White Mountains of California in 1989. In a vision quest one journeys into nature (in my case the high desert) alone for a period of days to seek guidance from the realm of spirit. I was asking to be shown the best way for me to help the earth and the animals. It was on this journey that I learned (from the quest organizers) that there were people actually teaching how to communicate with animals. It became clear during my quest that I was supposed to follow the path of animal communication. Once I discovered that animal communication was actually possible, I dedicated myself to learning it.

I now work full-time as an animal communicator, offering consultations for animals worldwide to help solve behavior problems, find lost animals, assist animals during illness and death, and bring people and animals and people and nature closer together. I am a proponent of natural training methods and holistic health care.

Because I had such a hard time learning this skill I developed a unique training system for teaching others to help move quickly through any blocks or barriers. I offer online classes and a Master Program in Animal Communication. I’ve found that the best way to learn is by doing and I have taught thousands of people how to talk intuitively with animals and the natural world.

When people learn to communicate intuitively it brings about a fundamental change in consciousness toward animals and nature. They see that all of nature is equivalent to humans in intelligence, feeling, and spirit. This then leads to a new dynamic, where people consider the needs of each individual and the viability of the whole rather than just being concerned about themselves. This is exactly the change we need to save our planet and ourselves.